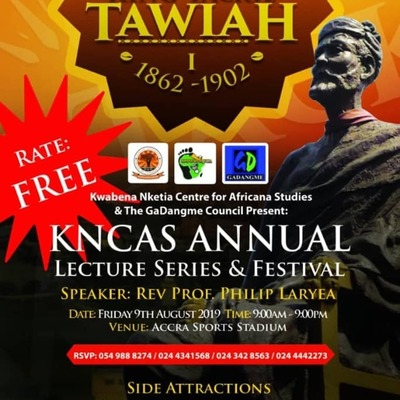 Abiasuma King Tackie Tawiah l was the Ga Mantse who reigned during the "Golden years" of Accra (1862-1902) and still acclaimed as the most illustrious, progressive and enterprising of all the Ga kings (Ayittey, 2006). It was he who was described by Dr. A. Boi Quartey-Papafio, "as a fulcrum-figure in the modern history of the Ga-Dangme” and a stalwart whose reign saw the establishment of Accra as the capital of Ghana in 1877. His era saw countless skilled young artisans, including Tetteh Quarshie who later brought viable COCOA into the Gold Coast after the Dutch and the Swiss. His reign also witnessed the translation of the Bible into Ga in 1865. He was not only development-oriented but also a leader who identified himself with his people. While he fought relentlessly to protect and uphold Ga-Dangme customs and traditions, he was also enlightened and progressive enough to abolish obnoxious customs. The King was also a warrior and was involved in the Anlo Wars of 1860. For his long reign, he gained the title “Abiasuma”, which means the “King Still Reigns.”

King Tackie Tawiah I was born in 1817 into the Ga royal family of Teiko Tsuru We at Kinka. He was named Nii Quarshie Tawiah. His father was Nii Teiko Doku, son of Ga Mantse and prosperous Accra trader, King Teiko Tsuru (1782-1787), and his mother was Naa Ashong Danso from Asere. She was a woman of great respect and connections, which greatly enhanced her son's reign. On his paternal side, King Tackie Tawiah I traced his royal lineage proudly to King Ayikushi, the Founder and the first Priest-King (Wulomo-Mantse) of the Gamɛi (Ga people). This means that King Tackie Tawiah I was from both Teiko Tsuru We and Abola Tunma We. In Ga language “We” means “family.”

He attended the Wesley Methodist School for his basic education. After his completion of basic education, he started life as a businessman and his knack in the Gold Coast trade and commercial terrain made him a Merchant Prince. He traveled to Tamale, Akropong, and Kumasi to trade. He also traveled to Togo, Sierra Leone, Nigeria, and Fernando Po to transact business and made friends with people from the Caribbean, and South America, especially Brazil. Thus, he later invited some of his Diasporan friends to come and settle in Accra to participate in the town`s progressive transformation through business. Alasha Nelson, an Afro-Brazilian or what the Ga people called Tabom people, was the most distinguished of this change agent. Alasha Nelson later became one of the pillars and the head of sizeable Brazilian community in Accra.

On 12 December 1862, Nii Quarshie Tawiah ascended the Ga throne as the 20th King (Mantse) of Accra after succeeding Nii Yaote, who reigned from 1859 to 1862. Prior to his ascension, Accra had mounted a series of resistance against the colonial government and had received harsh treatments. The British had gained Christiansborg Castle and had converted it into the official residence of the Governors in 1850. But the British had limited control over Accra (Ga-Mashie) and the Ga people were able to resist because of the presence of the Dutch at the Usher Fort, where the Ga royal house was located. So in order to subdue Ga resistance, the British Forces bombarded Osu, La, and Teshie in 1854 destroying their settlement. The move pushed many Ga people from these three enclaves to Ga Mashie and thereby increasing the population in the area and also “resulting in the erosion of traditional authority, responsibility, and prestige” (Mensah 2016).

Thus within two years of his ascension as the Ga Mantse, King Tackie Tawiah`s reign witnessed a riot between James Town and the Usher Fort in 1864. This was the time that British rule Accra ruthlessly, but he led his people to resist the British attempt at introducing Ordinance for the town, exacting taxes and land acquisition. When the three earthquakes hit Accra during the period, he mobilized the Ga people to stand its ravages and move on with their lives. He also got involved in the Anlo Wars (1855-1866), when the people of Accra joined forces with the Akwapim to fight the Anlo. He fought in the Tordzie or Adidome wars. In 1869, he led his Ga warriors to march with the combined forces of the British, Ada, Akyem and Akwapim against the Anlos and their Asante allies in the Vovo, Duffor and Clover Wars.

The king who was considered a great military tactician was assisted by his two powerful warriors: Asafoatse Oman and Asafoatse Ayi Kodwo Mankattah. The king fought alongside the Governor of Usher, who had the Gold Coast Constabulary in the June 1869 war at Asutuare. Here the Mankralo of Korgbor in Ada, Owiah Gbagblaza; Ada Mantse Kwabla Dzekley IV; Ordopre, a linguist of Ada; Nene Sakite, King (Konor) of Manya Krobo and some Asutuare warriors.

When the Asantes made several incursions to Ada to occupy it with the sole purpose of capturing the Songhor Lagoon to mine salt with the support of their formidable Anlo allies, and war broke out between the Ada people and the Asantes, King Tackie Tawiah offered assistance to the Ada people. In the end. King Tackie Tawiah and his allies succeeded to drive the Asantes out of Ada. After this war, another war broke between Ada and the Anlo over pre-war pledges; King Tackie Tawiah, supported the Adas again and they defeated the Anlo. After these wars, the King went on to ensure peace and security in his polity.
As the British colonialists continued to exhibit their shameless antics after securing the southern Gold Coast as their Colony, the King and his people remained unimpressed with their attitude. On 19 March 19, 1877, the British colonialists transferred their administrative capital from Cape Coast to Accra. Ayittey (2006) in line with other historians contend that three most important factors for the move were the phenomenal commercial development of Accra, its superior sanitation, and relative stability and security that King Tackie Tawiah I had brought to Accra.

He was an independent thinker who stood on his grounds against threats. When the British made presentations to him to assist them alongside King Asafu-Adjaye of Juaben to invade Asante to claim the Golden Stool he declined. Consequently, Governor Hodgson described him as an “uncooperative King” As a result he was exiled to Elmina from November 1880 to 10 March 1883 due to what the British described as the King`s “persistent disobedience of the order of the British government.”

After receiving his pardon in 1883, he was taken to Ga Mashie (Accra Central) in a great procession to continue his reign and lead his people in their struggles against the colonial regime. In 1894, when the colonial government passed Town Council Ordinance which led to massive resentments in the Gold Coast, the people of Accra and Osu waged a fierce campaign in opposition to the measure. In this opposition, Ga was led by their respected paramount chief, King Tackie Tawiah I alongside other Ga chiefs to opposed the municipal ordinance, for it had no place for traditional chiefs

On his achievements and human traits, Ayittey (2006) cites from the August 7–13, 1996 edition of the Accra based newspaper, The Free Press, thus: “He was not only development-oriented but also a leader who identified himself with his people. While he fought relentlessly to protect and uphold Ga customs and traditions, he was also enlightened and progressive enough to abolish obnoxious customs.” Indeed, throughout his reign, King Tackie Tawiah I demonstrated an extraordinary sense of statesmanship and fairness by seeking the welfare of his people. His love and sympathy knew no bounds. Kind, gentle and undaunted, he led his people through many difficulties. King Tackie Tawiah I was always ready to follow the advice of his cabinet. Nor could he be influenced by money; his probity was beyond question (Ayittey, 2006). He offered lands to the first Hausa community in Accra and even endorsed Braimah as the leader of the Mohammedan community (see PRAAD- Accra, ADM 11/1/1505 “Hausa Community-Accra”).

On 23 September 2002, a giant effigy of him was unveiled at the Accra central business district near the Makola Shopping Mall in honor of his great achievements. The effigy has the inscription "The Statue of the Late King Tackie Tawiah I" and is engraved with an emblem of an elephant with a deer standing on it, and a hand with a white bracelet pointing to the sky. The statue symbolizes peace, stability, and fairness that he stood for during his reign from 1862-1902. This was the second honour to him. Abiasuma Tackie Tawiah I was first honoured in 1997 when the Kanda Flyover in Accra was named after him. In the same year, the Ga-Dangmes instituted King Tackie Tawiah I Memorial Lectures, and Ga legal brain and scholar, Dr. Nii Armah Josiah Aryeh delivered the first lecture to a full house of Ga-Dangme people on their history and migration to present-day Ghana. He was the second Ghanaian King to be featured on Ghana stamp after Asantehene. It was said that King Tackie Tawiah I remembered for having defeated the Asante armies, and the stamp was issued during the centenary celebration of the Accra.

The final resting place of the mortal remains of this most distinguished Ga King has now become unimpressive within the walls of the Accra Brewery. Now the descents of King Tackie Tawiah l have resolved together with the Ga Mantse and the Accra Metropolitan Assembly to elevate the existing mausoleum to a more honorable, dignified and ennobling resting place.

Come in your numbers and let’s learn something about the Ga-Dangme culture ..

With great Gadanme Rev.Prof.Phillip Laryea which will be coming off on the 9th of August 2019 at the ACCRA sports stadium at 9:00 am sharp.

This program is powered by the Kwabena Nketia center for Africans studies and The Gadangme council. Follow page on all social media platforms. PROUDLY GADANGME Ga Adafitswaaa Wolomo